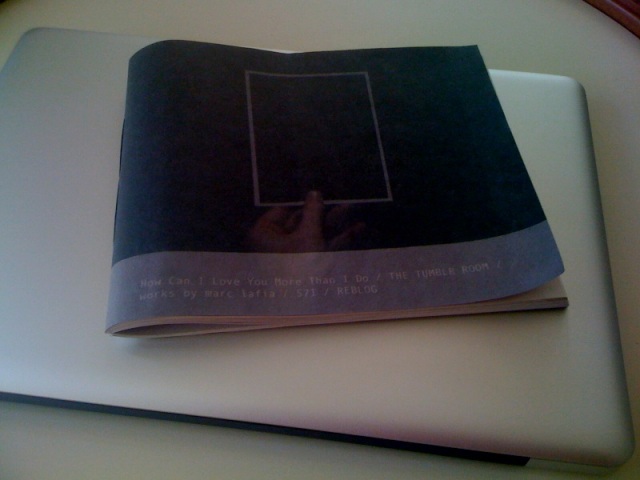 where do they come from?

they are always and never anonymous. the one thing we can be certain of is that they are in circulation. and that those passing the images around, collecting, blogging them and rebloging them are deeply committed to them, communicate through them and with them.

that is the aspect that the pictures present, capture, frame and that is how they are composed.

when you say composed, what do you mean by that?

composed in the sense of being seen and as such being framed. the works frame a context, the social online environment, the milieu which is captured by reading seeing the bloggers names, the comments, the number of likes, the testimonies.

you often talk about ‘reading seeing’.

to see is to read, we learn to see, seeing becomes so habitual that our world our instruments becomes invisible to us. reading seeing can happen as a result of taking a thing in one environment and putting it into another. you can take almost anything and put it in storefront window or gallery or museum or operating table and it is read seen again. we’ve seen it but we’ve never quite seen it like this or here. william burroughs uses the term surprised recognition for this. you’re surprised but it is in the realm of the recognizable. this can happen with shifts of scale, shifts of context, of tense, of orientation, of habit.

you talk about the shift of public private in these works.

how we see and read, how we write privately in a chat or on our blogs is very private or intimate. the screen gives us perhaps a certain courage and a certain shame, here all our emotions are more intense in the anonymity of the screen, our self loathing, our sense of grandness, feeling sexy or hurt, behind the screen, and we are all behind the screen now not only in social media but in our medicine, our warfare, our finances, our phones – the screen, the viewfinder is the instrumentation that gives us, through which we produce our realities.

interestingly you use the word viewfinder.

yes everything is on film now, meaning recorded, the desktop is a viewfinder, our phone, our credit cards, all of them give particular views of us, and give us views onto each other and our environment, our archives and knowledge databases. of course the viewfinder was once the sole domain of the camera. and it was the camera that produced photographs. everything today gives off recordings, and we are being recorded and recording continually, no place more so than in the context of the network. here we may feel entirely intimate and alone and so can express ourselves without reserve, at the remove of our presence. here we can be unleashed and unguarded, profoundly introspective, cruel and beautiful, cool and unfazed. alone to ourselves, behind the screen at times longing to be with others or being with others by exchange, this is the territory, the milieu i am photographing.

yes. absolutely. it is a kind of a reportage, and of course a certain kind of framing but deeply invested in a particular milieu. you must know the milieu, spend time with it, like being on location, involving yourself with persons and the scene.

yes, the exchange of photographs and also line drawings, statements, software formats and protocols and the social discourse of the entire milieu, which is always in the making exceeding itself. so you can say i am photographing the recordings made in this milieu, the sociality of the milieu.

why do you make the photographs or recordings at a much larger scale in your prints?

to see this milieu. the scale monumentalizes the intimacy of the feelings expressed